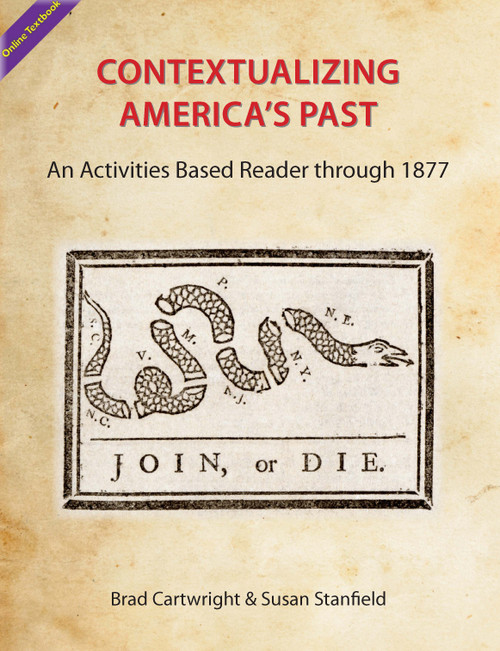 Book: Contextualizing America's Past: An Activities Based Reader through 1877

Sue Stanfield earned her B.A. from Baylor University, Masters Degrees from University of North Texas (Communication Studies) and Kansas State University (History) and her Ph.D. in History from the University of Iowa where she also completed a graduate certificate in Gender, Women’s and Sexuality Studies.  Her research focuses on race and gender in the nineteenth-century United States.  Dr. Stanfield teaches the U.S. History Survey (through 1865) as well as undergraduate and graduate courses on African American History, Women’s History, The Civil War and Reconstruction, History of Sexuality and the Nineteenth-Century United States.

Contextualizing America's Past: An Activities Based Reader through 1877 is an affordable and excellent addition to any United States history course's reading list for the period through 1877. This activities based reader challenges students to go beyond just reading the documents of our nation's founding. It engages them with probing questions and activities to evaluate the interpretation and understanding of each reading. The book is priced very affordably, so any instructor can add it to their course's reading list.

Bartolomé de las Casas: A Short Account of the Destruction of the Indies (1542)

Letter from Richard Frethorne to His Parents (1623)

Elizabeth Howe is tried for witchcraft (1692)

Declaration of Rights and Grievances of the Stamp Act Congress (1765)

Dunmore’s Proclamation: Freedom Declared for Those Joining his Majesty’s Troops (1775)

Abigail Adams and John Adams: The “Remember the Ladies” Letters (1776)

The Declaration of Independence (1776)

Petition of Prince Hall to the Massachusetts Legislature (1777)

Prudence Crandall: Advertisement for Her School (1833)

Henry David Thoreau: On the Duty of Civil Disobedience (1849)

Susan B. Anthony and Frederick Douglass: Debate Over Women’s Suffrage (1869)