Searching for America in the Streets of Laredo (Pinon) - eBook 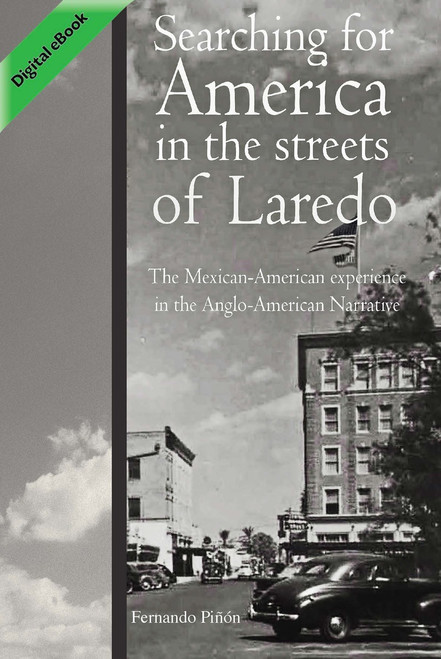 Searching for America in the Streets of Laredo (Pinon) - eBook

Searching for America in the Streets of Laredo: The Mexican-American Experience in the Anglo-American Narrative

For several years, if not decades, American society has been living in a state of dissonance. As Americans, we worship the motto of E Pluribus Unum, but are distrustful of each other and characterize each other as "givers" and "takers." We cherish our democracy, but do not trust "government," and allow for the manipulation of the electoral mechanism.

We praise the American worker, but hesitate to establish a living wage and deny them the power to organize. We relish "America the Beautiful" but criticize government when it attempts to curb pollution and permit the destruction of our "spacious skies," and "mountain majesties," and the fields of "amber waves of grain." We revere the concept of equality but are caught in a systemic web of intolerance and discrimination that we seem powerless to eradicate.

We glorify the immigrant as being the building block of our society, but rail against the newcomers from south of the border. Most of us have that feeling that "something is wrong" with America, but we have not taken the time to determine what it is that has soiled our civic and political culture.

In "Searching for America in the Streets of Laredo," the author confronts this political and cultural dissonance as it pertains to the Anglo American narrative of equality, individual liberty and fundamental rights and the Mexican American experience. It is a search that touches on the very soul of American democracy.

This "Search for America in the Streets of Laredo" then, is the author's quest for America's authenticity, an attempt to harmonize the glorified American ideology with the country's history, culture and actions. Only if America is true to its narrative can the United States go from being a world power which depends on force, to a world authority which leads through respect.

It is a search that all Americans must undertake if the United States of America is to continue its role as the dominant country in the world.

Before teaching, he was a journalist, having been the first Mexican American editor of a Texas daily newspaper -- The Laredo Morning Times from 1971 to 1974. He also was a political columnist for the San Antonio Express News in the 1980s and early 1990s. For many years, he was owner and publisher of El Visitante Dominical, a national Catholic newspaper.

As a journalist, he won several first place editorial and feature writing awards from the Texas Associated Press Association.

Mr. Piñón holds a bachelor’s degree in journalism and a master’s degree in political science from the University of North Texas, and finished one year of law school at Notre Dame University.

As a journalism student, he was a member of the Sigma Delta Chi, the honorary journalism fraternity; was editor of The Campus Chat, the university student newspaper; and won a first place column-writing award in university competition.

In 1972, he was a delegate to the Democratic National Convention held in Miami Beach, Florida, as a George McGovern delegate.

Transcendence is his first novel.