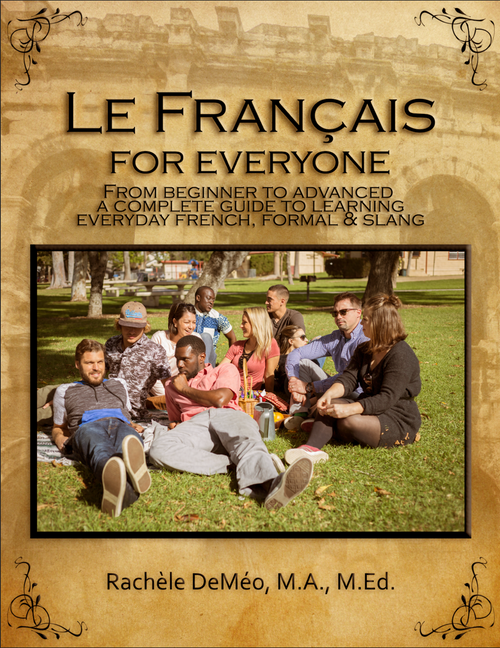 Written by a native French speaker who was raised bilingual (English-French), this textbook guides English-speakers to learn French fluently. This unique book is intended for College professors, teachers of all levels of French, students of all ages, and parents wishing to teach their children French. Learn French pronunciation, grammar, vocabulary–including slang (and words used everyday not usually taught in textbooks), culture, music, French cinema, a discovery of the French-speaking world, and an introduction to French philosophy and literature. Videos with short lectures are accessible online. Interviews with other francophones are also included. Other learning tools and tips are provided.

Rachele DeMeo was born and raised in Nîmes (Languedoc-Roussillon), Southern France. Raised by an American-Italian father and a British mother, Rachele grew up in a bilingual environment surrounded with a variety of cultures and languages. Rachele completed a part of her undergraduate education in France. She moved to the United States in 2002 to continue her studies and intern for Congressman Christopher H. Smith.

In 2004, she moved to California for a teaching position and furthered her education, graduating with a M.A. Additionally she pursued a (second) Masters in Education specializing in Teaching and Learning. Over the last 14+ years, she’s had experience teaching K-2, 6-12, and College. She specializes in teaching predominately French (all levels) but has additionally taught Italian and English (as a Second Language). She regularly speaks at professional development workshops and educational conferences. She currently teaches French at several Colleges/Universities in Southern California and online. Rachele partially homeschools her children. She is also on the executive board of the American Association of Teachers of French (San Diego Chapter), as secretary. She enjoys cooking, loves extreme sports, singing, and playing the piano. Rachele is married, has two children, and multiple pets.