Against All Odds: A Guatemalan Boy’s Quest for the American Dream – Autobiographical Sketches (Donis) - eBook 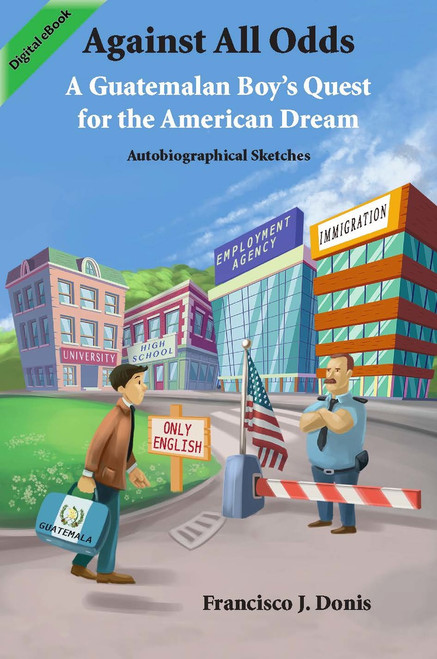 Against All Odds: A Guatemalan Boy’s Quest for the American Dream – Autobiographical Sketches (Donis) - eBook

The book tells the story of a young immigrant’s quest for the American Dream. When he arrives in the United States from Guatemala, he does not speak English, has only primary school education, no friends or relatives, and 20 dollars in his pocket! Against all odds, but with determination and hard work, he fights obstacles at every step of the way until he reaches his goal. The author is like a character out of a Horatio Alger’s story and shows that whether you are born in the United States or not, the USA has been, is, and will always be the land of opportunities if you are willing to work hard.

Born in Guatemala, the Author spent his formative years in Guatemala but, still in his late teens, immigrates to the USA in search of better opportunities. First, he learns English, then goes to an Adult Education Program to prepare for the High School Equivalency Test (GED). The GED allows him to go to college where he earns an Associate Degree in Arts, A Bachelor’s degree in Arts, A Master’s in Psychology, An M.Phil. in Psychology, and a Ph.D. in Experimental Psychology. These, except the Ph.D., while working full time to support his studies and a wife and two children. He becomes a Professor at Central Connecticut State University where he reaches the highest step of the professoriate ladder after only 10 years. He does a lot of work on behalf of Latinos and receives two very prestigious awards: The Latino Citizen of the Year by the Latino and Puerto Rican Affairs Commission of the Connecticut Legislature, and the Latino de Oro for Trajectoria (Life time achievement award) from the Identidad Latina, the leading Spanish newspaper in Connecticut. Retires after 20 years of teaching primarily because he is diagnosed with Parkinson’s Disease and feels that the disease is affecting his performance in the classroom. He was the founder of the Laboratory for the Study of Comparative Psychophysics where he did research with pigeons. Some of the data has been published in prestigious journal in his field. Upon retirement, he was given the distinction of the title of Emeritus Professor. He now lives with his second wife, Pamela, in the rain forest of Guatemala.

Reviews of the Book:

"In Against All Odds: A Guatemalan Boy’s Quest for the American Dream, Dr. Francisco Donis recounts the story of his life in an earnest and authentic voice.

From his humble beginnings in Guatemala with his parents and siblings, Donis travels to New York in search of adventure and wealth. With a few dollars in his pocket, he soon understands that success will require much more of him than he first imagined. Armed with the realization that an education will help him succeed, he returns to school, and by dint of determination and hard work, begins to achieve his goals.

This original life story is sure to inspire readers who share a desire to achieve seemingly unattainable goals, and it provides an insight into the very real, personal struggles immigrants face as they strive to achieve the “American Dream.” With an emphasis on hard work and determination, Donis reminds his readers that America remains a country that provides exceptional opportunities for all." Katherine Carlman, M.A.

"As a colleague of Dr. Donis, since completion of his doctorate, I read with wonder, delight and some amusement his “Quest for the American Dream,” a dream that I as a first generation American and I, now a Professor of Psychology of Hunter College of the City University of New York (CUNY), we shared and achieved but in Francisco’s case this was accomplished “Against All Odds.” In short, I found the book quite wonderful and believe it has the power to inspire.  In short, I would very much like to see the book reach and make a difference, a difference in young immigrants inspired by his story. However, if it is to be effective it has to reach the hands and thus the minds of young people such as Francisco."  Sheila Chase, Ph.D., Professor of Psychology, Emeritus