"One Day We Are Going Home": The Long Exile of Elizabeth Mafeking (McGee) - Online Textbook 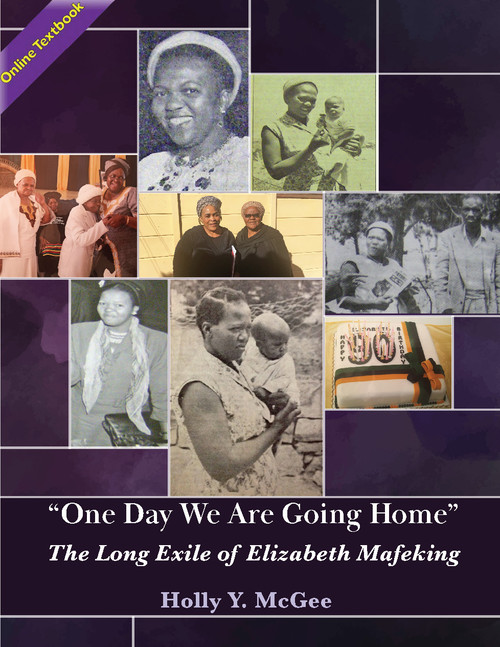 "One Day We Are Going Home": The Long Exile of Elizabeth Mafeking (McGee) - Online Textbook

About the Book: Elizabeth Rokie Mafeking was a titanic figure in the history of resistance to Apartheid in South Africa. As the president of the African Food and Canning Workers Union and the national Vice President of the African National Congress-Women’s League, this dedicated mother of 11 risked everything to travel to Europe at the dawn of Apartheid—in direct defiance of government orders—to publicize the evils of racial segregation on a global stage. The hefty price for her actions was a National Party mandate that called for her immediate banning and forced separation from everything and everyone she loved. Rather than submit to being politically silenced, however, Mafeking escaped and fled into exile in neighboring Lesotho. “One day we are going home”: The Long Exile of Elizabeth Mafeking analyzes Mafeking’s life, union work, thirty-two desperate years in self-imposed exile, and long-awaited return to South Africa during its transition to democracy in the 1990s.

“One Day We Are Going Home”: The Long Exile of Elizabeth Mafeking is a welcome addition to the growing literature of biographies, autobiographies, and other work devoted to the important contributions of African women to the South African liberation struggle. Dr. McGee’s work adds much-needed depth and dimension to what devastation apartheid inflicted upon African family life.
— Pamela Brooks, Oberlin College & Conservatory

McGee’s manuscript is a testament to her skills as a researcher, as an oral historian, as a comparativist, and as a theorist. Indeed, she joins a small cadre of scholars who have charted the opposition to racial inequalities, white supremacy, class exploitation, and gender differences by showing how localized events, and topics had broader international implications.
— Dawne Y. Curry, University of Nebraska-Lincoln

Based on impressive oral and archival research, and written with tremendous passion, fluency, and control, McGee’s book deserves a wide audience. ‘Political motherhood’ has been a persistent question in South Africanist scholarship over the last few decades…and McGee’s excavation of Mafeking’s family life is in line with this strand of scholarship. Her evident empathy and resonant passion for what it meant to be Elizabeth Mafeking is one of the most striking elements of her manuscript, and makes for vivid reading.
— Daniel Magaziner, Yale University